The Kerri D. Efird Memorial Scholarship was established to carry on the memory of a very special person, whose life was cut very short, but in her 18 years accomplished more than more will in a long-life span.

Our precious daughter, Kerri, passed away on February 21, 1999 at the age of 18. Kerri had cystic fibrosis and was a diabetic. We went to Duke, in Durham, NC, for regular check-ups for many years, as she was diagnosed at the age of 11 months. Around the age of 16, Kerri’s lungs, through reoccurring infections, no longer responded to antibiotics and was placed on the transplant list for a set of lungs. On May 10, 1997 (Mother’s Day), she underwent a double lung transplant. Kerri was a very strong and inspirational person who refused to give up. After transplant, Kerri was in the hospital for 11 weeks and then in rehab for 5 weeks at Duke Medical Center. We came home in August of 97; 1 week after school had started. She went back to school where she was in the 11th grade at West Stanly High School in Oakboro, NC. We did many rounds of IV’s for various complications at home, but Kerri who was very involved in Drama – The West Stanly Players, continued to go to school and keep up with her class. It finally became best for her to go on home bound, due to the monthly hospitalizations that had now started due to continued complications. But Kerri, being the strong person she was, she had actually completed the number of required courses for graduation in the fall of 1998 and decided to take on-line courses at our local community college.

Kerri did not get to walk across the stage at graduation with her class of 1999, in June of 99, but in spirit, she was there with us when her name was called for graduation and she was recognized for her academic achievements against all odds.

The 17th KDE Bike Run was held on a cold & rainy, April 25th, & approx. $9600. was raised with only 32 motorcycles participating but it was a successful event regardless of the weather.

The 18th Kerri D Efird Memorial Scholarship Bike Run was held on April 30, 2016, and was very emotional, as Kerri was only 18 years old when She passed away – and this itself made it very emotional for us. It once again was a very blessed event with 132 bikes and $11,000 being raised. We awarded four $1000 scholarships on Senior Night, June 1, to four worthy Seniors once again and it was an honor being a part of this ceremony.

The 19th Kerri D Efird Memorial Scholarship Bike Run was as per tradition, the last Saturday in April – which fell on April 29.  It was a wonderful day, but also a very solemn day, as this year’s Bike Run has taken place, longer than Kerri lived. We were blessed with a beautiful day with many friends and family that turned out to help us celebrate Kerri’s life! We had 225 bikes and raised $14,000. We proudly awarded $5000. to 6 graduating Seniors at West Stanly Seniors Night in May.

The 20th Kerri D Efird Memorial Scholarship Bike was a blessed day! It was held on Saturday April 28 and we had a wonderful turnout. We had a total of 230 bikes and raised $13,000. We had the pleasure of being a part of the West Stanly Academic Seniors Awards Nigh in May of 2018 and presented 6 – $1000. Scholarships to students that made us so proud to be able to award them to these deserving students.

The rest is a testament to Kerri’s life, and we have awarded $99,000., to graduating seniors at West Stanly High School since the beginning of the Scholarship.

The 22th Kerri D Efird Memorial Scholarship Bike Run will be held, on Saturday, April 24, 2021 @ West Stanly High School starting at 9AM. Please call if you need more info on this great event. We will be taking extra safety precautions for the Covid situation but we pray this one will be the biggest and best yet!

Please continue to pray for all involved in this monumental effort! The Bike Run is very important to this endeavor, as it is the sole support of the Scholarship Fund, along with generous donations from corporations/companies/& individuals.

Please keep everyone involved w/ the Bike Run in your thoughts and prayers as we continue to keep KERRI’s Memory alive!

Our daughter was a very brave and determined young lady. With the continued support of our family & friends, we want to keep our daughters strong & determined faith alive, along with the desire to help someone else continue their education and carry on the memory and undying spirit of Kerri.

Thank you for your time and interest. Please feel free to call with any questions/concerns.
Once again, thank you for your support in our endeavor to carry on our precious daughter’s memory. 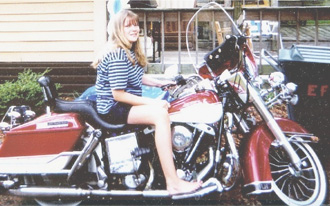 The Kerri D. Efird Memorial Scholarship was established to carry on the memory of a special person whose life was short, but in her 18 years accomplished more than most of us will in a lifetime.

Our daughter, Kerri, passed away on 2/21/1999 at the age of 18. Kerri had cystic fibrosis. Kerri’s life made such an impression that the KDE Memorial Scholarship was established.

Our annual bike run is the only fundraiser held to support the scholarships which are awarded to West Stanly High School Seniors each year.